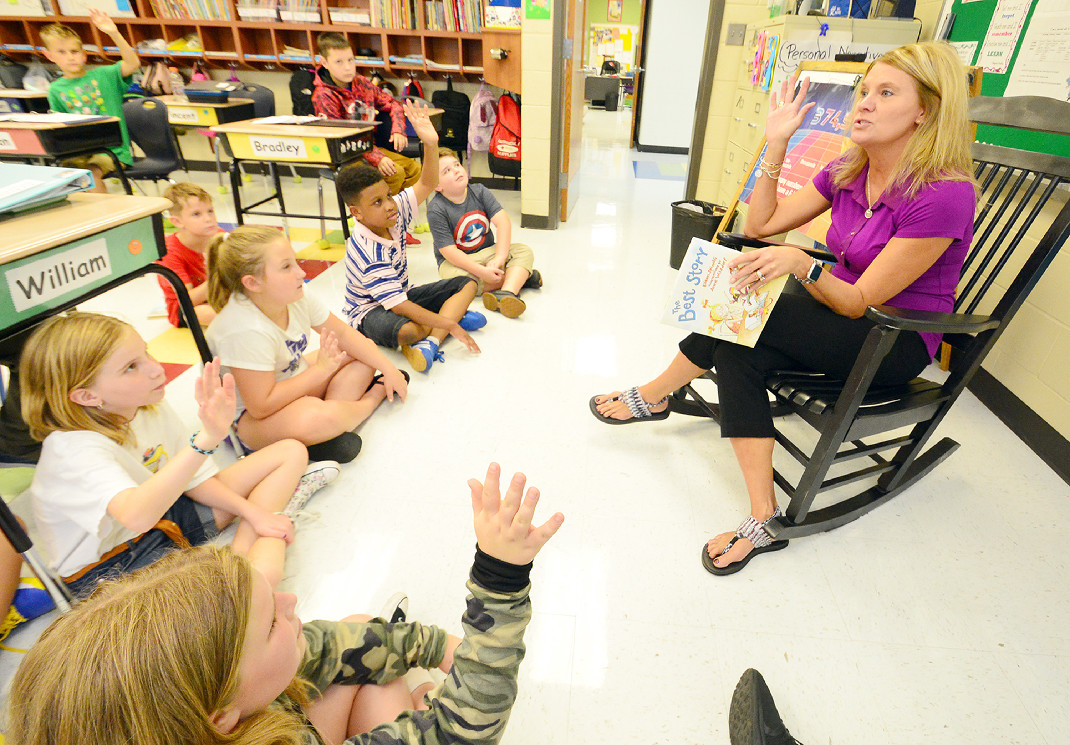 A longtime teacher at West Elementary School is one of 10 teachers from across the United States to have won $1,000-worth of “coins” to spend on classroom supplies.

Monica Higgins has taught fourth grade at West Elementary for 26 of the 27 years she’s been there, and has been a teacher for 28 years.

Higgins said she’s witnessed how the ways teachers communicate with parents has evolved over time, and her exploration of the ClassTag app option won her the national recognition from the namesake New York City-based company.

ClassTag gives teachers the option to communicate with as many families as they want to at a time via email or text message on any device — as families have signed up for the free service.

Higgins said all of her 22 students’ families have opted in.

Interaction with parents through ClassTag earns teachers such as Higgins “ClassTag Coins,” and Higgins won 100,000 coins — worth $1,000 — through the company’s recent “Parent-Teacher Engagement Contest.”

“Parent-teacher engagement is often the single greatest factor in student academic success, yet teachers still struggle to get parents plugged into their child’s classroom activities. As part of the contest, teachers were asked to share their personal stories of measures they have taken to engage their students’ parents in their classroom,” according to a ClassTag news release.

“We’ve had to change as educators because parents aren’t checking those things,” Higgins recalled of when she handwrote newsletters for students to take home.

“I think parents want to know, but parents are busy, and kids aren’t really good about giving that paper newsletter every week, plus things come up during the week,” she said.

She explained the speed and easy access of something like ClassTag that connects her phone or computer to those of her students’ families lets parents and her coordinate to try to give students and her classroom the best experience.

For example, she said, a parent could give her a heads up that, “Hey, we had a rough morning at the house,” which gives her an opportunity to handle or diffuse a situation or feelings about it that a student might bring to school.

Higgins added, though, “We can’t always be calling home or texting home when something’s negative.” She said it’s also important to send home messages of when a student had a good day.

“Sometimes a two-minute phone call or a one-minute text can make all the difference,” she said.

Higgins was the only Missouri teacher to win the ClassTag contest. Two of the other 10 teachers to win were from New Jersey — with another two from Wisconsin, two from Idaho and one each from Pennsylvania, New York and North Carolina.

She said the ClassTag Coins can be redeemed through an online store. She’s already bought an Amazon gift card she used to buy 10 pairs of headphones for students who wanted them instead of earbuds for iReady testing last week — iReady is a reading and math assessment tool Jefferson City Public Schools use to track students’ progress throughout a school year.

Higgins said her next purchase might be tubs to organize her classroom library, adding by December, students’ school supplies run low, and she can buy some of those materials for her students.

“I don’t know if people realize how much money teachers spend on their own,” she said.

Philip Sitter is the News Tribune’s education reporter. He’s a graduate student at the University of Missouri’s School of Journalism and has also written for the Columbia Missourian and MU’s Bond Life Sciences Center.